If you like to plant and grow things, you may be a Master Gardener in the making. A desire to help your community is another plus. In case you need more convincing, consider these 10 benefits of joining us and then take the next step to become a Colorado Master Gardener.

Number 10: You’ll be a better gardener. Becoming a Denver Master Gardener doesn’t mean you’ll be a perfect gardener, but at least you’ll know why the daisies died, what’s wrong with your tomato plant, why the lawn has brown spots, and what the heck is eating those roses. The CSU Master Gardener program is like getting a mini-degree in horticulture.

Number 9: You’ll help with important research. Master Gardeners are often called on to help with CSU Extension research projects. One recent project included collecting tree data as part of the Rollinger Tree Collection Survey project, a collaboration with the Denver Botanic Gardens and other partners to understand the past, present and future of Denver’s urban forest.

Master Gardeners like to meet, mingle and break crab legs together.

Number 8: You’ll meet and mingle with like-minded folks. Gardeners like to talk—and listen. Whether you’re a social butterfly or just like to belong to a tribe with similar interests, there are plenty of opportunities to enjoy each other’s company.

Number 7: You can share your knowledge. People have questions and now you’ll have the research-backed information to provide answers in person at farmer’s markets and special events or by answering email questions from home. There’s a lot of gardening misinformation out there, but you can help dispel the myths (except when it comes to marijuana).

Number 6: You can volunteer in meaningful ways. Community outreach is an important part of being a Denver Master Gardener and others appreciate your contribution. The vegetables grown in the Harvard Gulch Demonstration Garden are donated to help feed the hungry; The Haven at Fort Logan offers another chance to serve others with your gardening skills.

Master Gardeners plan and plant the CSU Extension exhibit at the Colorado Garden and Home Show.

Number 5: You’ll get to work behind the scenes at the Colorado Garden and Home Show. A favorite volunteer project is being part of the annual show whether helping to build the CSU Master Gardener display or answering attendee’s questions. Free entry to the show is an added bonus.

Number 4: You can stretch your leadership skills. Being a Master Gardener lets you take the lead on a special project in a safe and supportive environment. Creativity, innovation and new ideas keep the program interesting.

Number 3: You’ll receive a well-recognized credential. Anyone who’s been paying attention has heard of CSU Extension’s Master Gardener program. The title is a well-known and well respected credential in the gardening world and in every state across the country.

Being a volunteer at the City Park Greenhouse refreshes gardening skills for the new season.

And the Number 1 reason for becoming a Denver Master Gardener: Volunteering at the City Park Greenhouse.  It’s one of the most revitalizing volunteer gigs, and it happens at a time of year when gardeners need it the most.

Those are my top 10 reasons. What are your top reasons for becoming a Denver Master Gardener?

By Jodi Torpey
A Denver Master Gardener since 2005

We are now taking applications for the 2018 Colorado Master Gardener volunteer class. We are also recruiting Colorado Gardener Certificate students who take the classes without volunteering. The application deadline is October 18th, 2017 and weekly Wednesday classes run from January 24 through April 10, 2018 from 9:00am-4:00pm. Classes will be held at Denver Botanic Gardens and Jefferson County Fairgrounds. For more information about the program, please visit our website: http://www.cmg.colostate.edu/about.shtml

If you are interested, please call 720-913-5272 or email merrill.kingsbury@denvergov.org for an application.

If you live outside of Denver, please see this link for the CO Master Gardener Program in your county: http://www.cmg.colostate.edu/ask-cmg.shtml

Gardens in the Sky

Posted on September 5, 2017 | Comments Off on Gardens in the Sky

Green roofs or living roofs have been around for thousands of years. The Hanging Gardens of Babylon were constructed around 500 B.C. using tar and layers of reeds to waterproof structures, upon which lush plants thrived. Europeans have long embraced green roof design and today, about 10% of homes in Germany have living roofs. North America has been slower to adopt green roof design, but the practice is gaining momentum, particularly in urban areas including Chicago, New York, Portland and Washington DC. This November, Denver residents will vote on The Denver Green Roof Initiative, modeled after legislation in Vancouver, which requires commercial buildings in excess of 25,000 square feet to dedicate a portion of roof space to vegetation or solar panels.

What are green roofs and why are they valuable? A green or living roof is one that is either partially or completely covered in vegetation on top of the human-made roofing structure.  There are two major types of designs – extensive and intensive. Extensive green roof systems include a thin waterproof membrane covered in a lightweight, shallow planting medium and low maintenance plants, often using a system of trays  Intensive green roofs involve a more complex system of layers, are more expensive, require greater structural support and allow for a wider range of vegetation, such as trees and shrubs (see diagram). Intensive green roofs can serve as parks or public spaces, such as the Mordecai Children’s Garden at the Denver Botanic Gardens or Highline Park, built upon an elevated historic freight line in New York City.

Denver has the third highest heat island effect (the average daily urban-rural summer temperature difference over the past 10 years) in the country.  Green roofs moderate the HIE by cooling ambient air through evapotranspiration. They also provide summer and winter insulation to buildings thereby reducing the carbon footprint. Other benefits include decrease in stormwater contamination, reduction of pollution by filtering the air as it moves across the roof, additional wildlife habitat for birds, insects, spiders and other animals and absorption of noise. While green roofs, especially extensive designs, are expensive, they have been shown to last longer than traditional roofing resulting in long-term cost benefit. 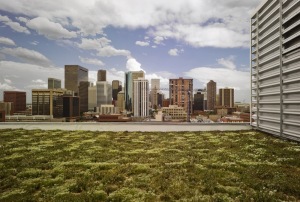 The 20,000 square foot green roof at Denver’s Environmental Protection Agency Region 8 Headquarters  was installed in 2008 in partnership with Colorado State University and other organizations. Using a system of 2′ by 4′ plastic trays, plants were studied for exposure to winter and summer extremes, wind exposure and soil conditions, among other factors. The roof contained four species of Sedums, including Sedum album (white stonecrop), Sedum kamtschaticum (Russian stonecrop), Sedum acre (goldmoss stonecrop) and Sedum spurium (two row stonecrop) and three varieties of Sedum spurium: ‘Dragon’s Blood’, ‘John Creech’ and  ‘Red Carpet”.  According to the researchers, “These plants were selected for visual appeal as well as survivability in harsh environments with temperature extremes, and for their capacity to withstand drought conditions better than most plants.” Another outstanding performer was the brittle prickly pear, Opuntia fragilis. According to Dr. Jennfer Bousselot, “It’s spectacular especially since it has been virtually untouched since the formal study ended in 2010. It has thrived on only light irrigation during the growing season.” Find extensive documentation of the project here.

Green roof design addresses many environmental concerns. Will it “take root” in Colorado?  To learn more about green roof design and Denver’s upcoming ballot initiative, here are some additional resources:

The Denver Post, March 14, 2017. “Green roofs will benefit Denver but they shouldn’t be mandated”

Comments Off on Gardens in the Sky